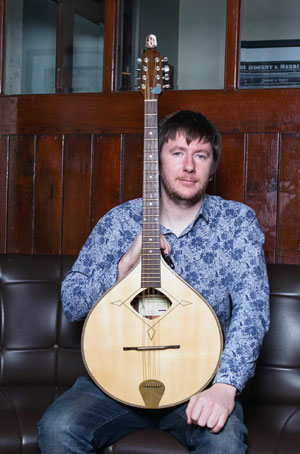 Daoirí Farrell, from Dublin, is the Bouzouki player and singer in the band. Although the only singer/musician in his immediate family, Daoirí was introduced to the music at a very early age, by his parents who shared a keen interest in artists such as Christy Moore, Andy Irvine, Frank Harte, Planxty and The Bothy Band to name but a few. Although Daoirí took up performing music later in life, the music had always been a large part of his life.

After serving his time and working as a fully qualified electrician for many years, the curiosity of researching, playing and performing Irish traditional music and song eventually got the better of Daoirí, and so he went on to study music performance under the watchful eye of the lecturers of the BCFE Irish Traditional Music Performance Diploma course in Ballyfermot, Dublin. Daoirí continued onwards to complete a Degree course in Applied Music at DkIT, Dundalk, Co. Louth and followed that by completing the Irish Music Performance Masters at the Irish World Academy of Music and Dance, University of Limerick.

During, and indeed after his time studying, Daoirí has found himself all over the world playing for audiences in places such as Ireland, England, Scotland, France, Germany, America, Canada and India, with artists such as John Carty, Donal Lunny, Karen Tweed, Sean Keane, Alan Doherty and many, many more.

He recorded his first solo album named “The First Turn” in 2009. An album of songs which he recorded with Alan Doherty, James Ryan and Robbie Walsh. This put Daoirí on the map within the traditional and folk singing world.

As a member of the Monkstown Comhaltas branch, Daoirí won the English Singing over 18s at the All Ireland Fleadh, held in Co. Derry in 2013, making him, together with Frank Harte, the only Dublin competitors to have won this competition in years.