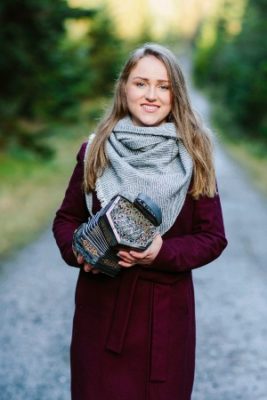 Caroline was, from a young age, exposed to the richness of West Limerick and Sliabh Luachra traditional music, an influence which has become the cornerstone of her uniquely vibrant, passionate and emotive style of concertina playing. Now having toured extensively throughout Europe, Canada and America, performing at festivals such as Fleadh Cheoil na hÉireann, Goderich Celtic Roots Festival, Celtic Colours and Le Bono Winter School in both solo and ensemble capacities, Caroline is truly a world musician.

At the age of seven, Caroline began taking tin whistle lessons at her local Comhaltas branch, and soon afterwards progressed on to concertina. Under the guidance of her teacher, Noel Hill, she developed proficiency in her art, and by fifteen, was performing both nationally and internationally. In 2006, Caroline was awarded the prestigious Lán Mara award, in recognition of outstanding achievement in national music examinations. In 2008 Caroline began studying at the Irish World Academy of Music and Dance, where she received a BA in Irish Music and Dance with first class honours after graduating in 2011.

In addition to her TTCT diploma in Irish traditional music teaching, Caroline also completed a Professional Diploma in Music Education in 2012. Her versed approach to tutelage is not only a testament to her musical expertise, but demonstrates the patience and empathy of experience. She is a regular performer and tutor at Irish, roots and folk music festivals all over the world, and teaches and performs regularly around the South West of Ireland. Caroline currently lives in Dingle, Co. Kerry, where she performs and teaches regularly.